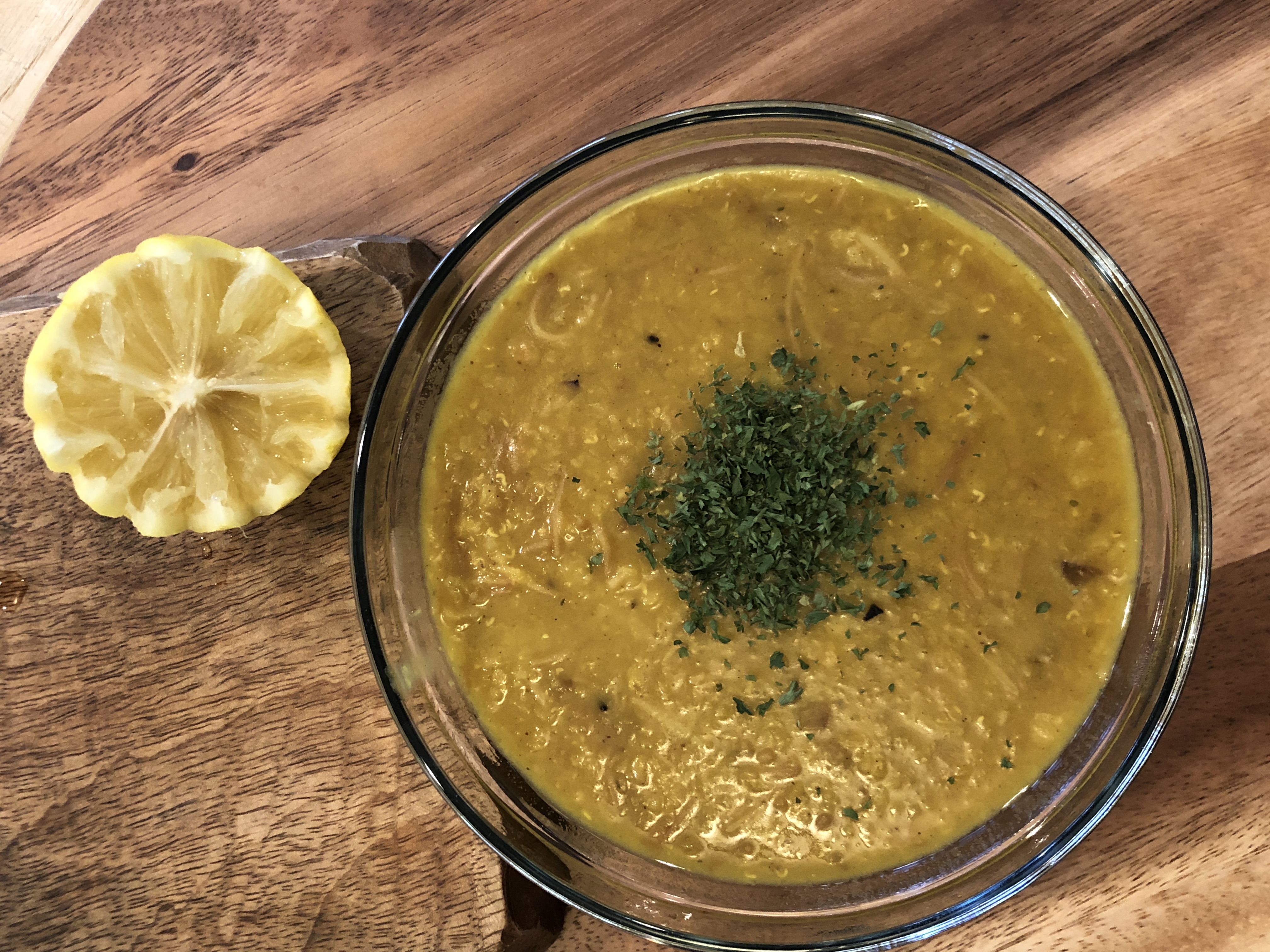 My own history with lentil soup began when I was probably around four. My first recollections of seeing it included how different it looked from chicken soup and noodles. Though I was an inquisitive child, this was not what soup looked like in my little world up until now. Upon first glance, I wasn’t quite sure I wanted to test out something I overheard an adult say about curiosity killing cats. Ever since then I’d been careful about being too curious about anything, wondering whether or not maybe it applied to little people like me too, but too frightened to even ask. Anyway, the rich and comforting aroma must have overcome my visual skepticism and concern for my life because I did try it with no fuss at all.

I liked it so much that I also remember asking my mother why she didn’t make it more often. She explained to me that although it is fine to have in any time of year, lentil soup is a special soup consumed as part of the diet during bautha lent, the three day fast of Ninevah, and a part of our Chaldean Catholic Church history. Little did I know that my questions about lentil soup would give my wise mother the chance to segue into what became lots of future lessons about bautha lent, the history of eating lentil soup and our Chaldean heritage over many years of the rest of my childhood.

Ba’utha is a three day celebration observed by the Chaldean Catholic Church exactly three weeks before the start of Lent. In the 6th century, a severe plague afflicted the northern regions of modern day Iraq. The plague was devastating. Out of sheer desperation, the people pleaded with their bishop for him to provide them with a possible solution. As the bishop himself was unsure what to do about such a serious problem, (one of life or death for all should the plague continue much longer) he sought help through the scriptures. Divine insight, inspired by his reading of the story of Jonah, told him exactly what to do, and what to say to the people. In the story of Jonah, God instructed Jonah to warn the people of great destruction unless they repented for their sins.

The bishop went back to the anxious and terrified people eagerly awaiting his reply, and told them their repentance was key to ending the plague. The bishop ordered a three day fast to ask of the Lord his forgiveness. On the 4th day of this fast the plague stopped. Since then, every year, exactly three weeks to the day before the start of lent, there is this three day celebration to commemorate God’s forgiveness. The Lord’s forgiveness resulted in our ancestors’ deliverance from the plague four days into their penitent state.

So now that you know something about the history of our religious heritage, you might be wondering if the reason lentil got its name is due to its Lenten association. Etymologists are not quite sure the exact origin of the word, but they do know that this legume was cultivated in ancient days in the Middle East so it’s very possible that it did. The etymology of the word lent is spring so we can at least be sure that the word lent was here first, and didn’t evolve from lentil. (Well, that’s one ‘chicken or egg first’ story solved at least!) There is something very comforting and satisfying about observing food traditions from your childhood,(one very big reason they’re called comfort foods) and lentil soup is one of those things.

As an adult, I have to tell you that I still like lentil soup as much for its flavor and aroma as I did when I was so young. I probably like it even more now as an adult since I first learned of all the nutritional benefits too. I’m inclined to make it and serve it at other times during the winter months, as well. There’s no reason to restrict the enjoyment of delicious and nutritious food exclusively to one segment of time and forego the benefits all the rest of the time, as I see it.

Lentils are such a powerhouse of good carbohydrates for sustaining energy throughout the day and an equally great source of fiber. You can easily understand how they would be an excellent food for sustenance during fasting periods. It’s such a thick, robust and filling soup that all alone it makes it the perfect food when you’re on a fast. Since our fast requires that we cannot consume any dairy or meat products, it’s good to know that lentils contain a good deal of the magnesium we would have gotten from milk. Though not a very high source of protein, a serving size of about a cup provides you with about 18 grams for a start.

They are also a good source of vitamin B-complex with high amounts of iron. Folic acid, a part of the B-complex group, is already familiar to many women who have taken it when they were pregnant as a deterrent to birth defects. A cup of lentils contains a full day’s supply of the daily requirement of folic acid. The benefits of folic acid also include better neurological function and significant reduction of heart disease and colon cancer risks. I must say that even when I’m not fasting and I occasionally make lentil soup as part of our regular menu plan, I do feel somewhat more energized. I think that the psychological aspect of being a comfort food helps with that feeling of well-being, too.

God indeed works in mysterious ways. The repentance that he required for the forgiveness of sins to lift the plague also resulted in another blessing of a nutritious food to help sustain them through the last of their troubled days. Lentils and lentil soup continue to be a source of excellent health benefits to the present day. I don’t have any scientific proof but, if you ask me, I think that if you consume lentil soup with a penitent spirit, God just might make it even more miraculously powerful for your health and well-being.